Learn all about Hollywood Regency design and discover how you can create this eye-catching style in your own space. 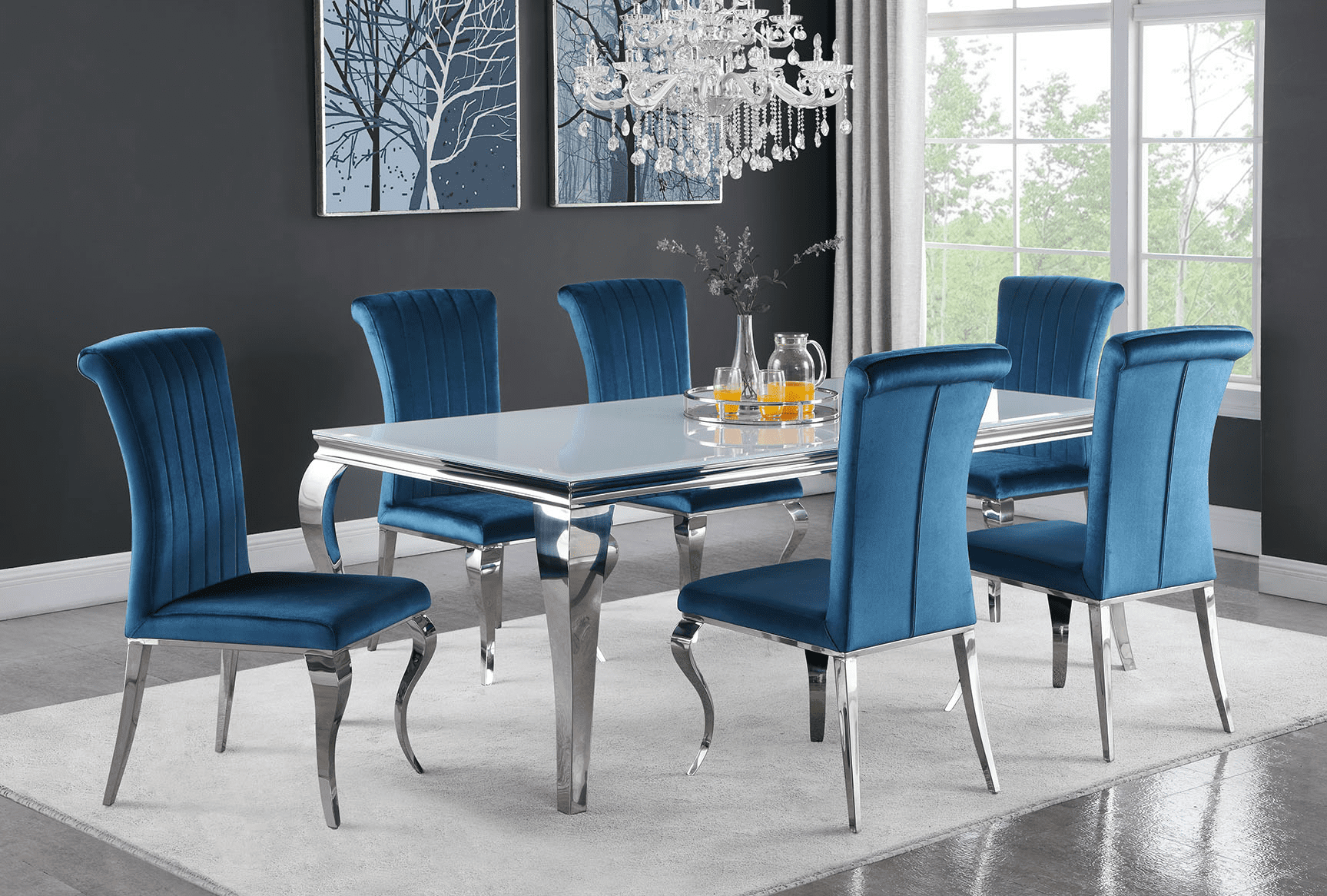 If you’ve ever been described as Team Too Much, if minimalist design has no place in your home, and you’re looking for something a little extra, allow us to introduce you to our friend Hollywood Regency style.

Also known as Regency Moderne, this style is all about aesthetic maximalism. Imagine a hot pink sofa with a zebra-print rug and gold chandelier, and you’re starting to get the picture. With Hollywood Regency style, you don’t need to turn down your quirky personality to fit an interior design style — if anything, you can turn it up.

If you’re ready to curate an eclectic collection of over-the-top home decor, it’s time to learn what goes into Hollywood Regency design and discover how you can get the look in your own space. 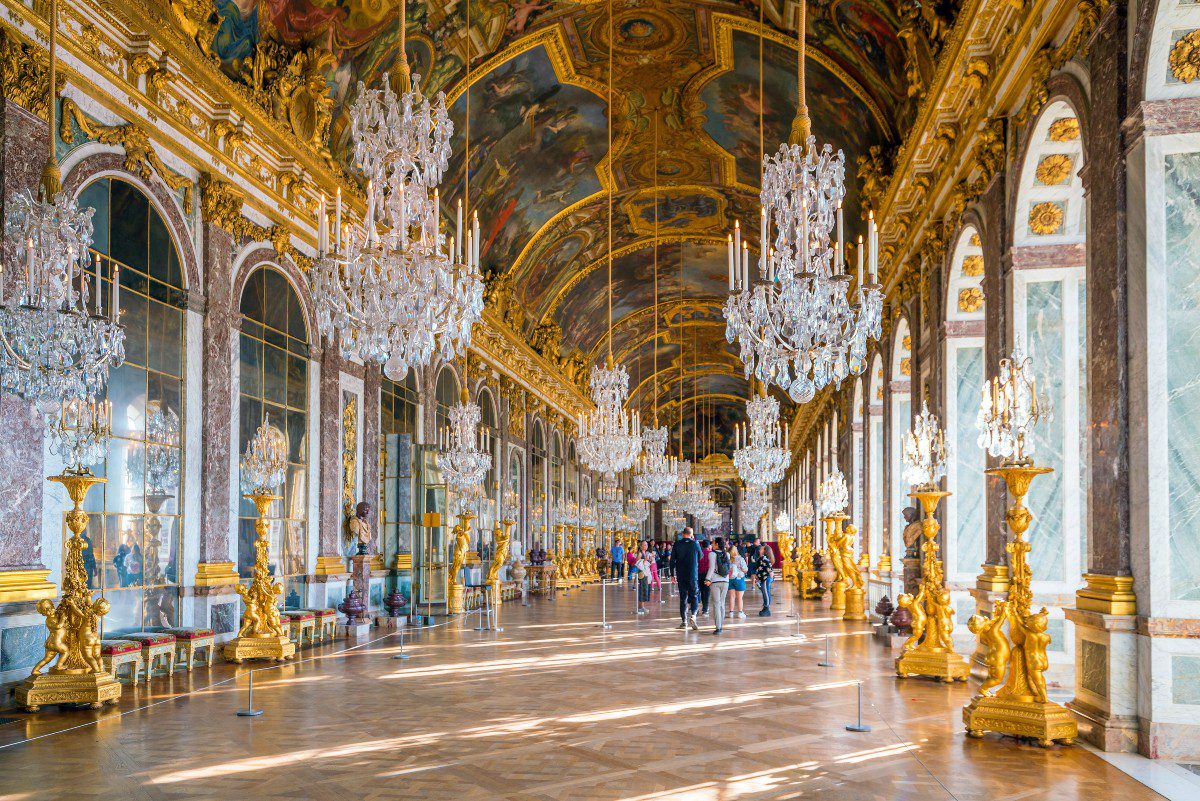 Every design style takes inspiration from dozens of outside elements — including the natural, cultural, political, and artistic climate that exists when the style comes about. Minimalist style, for example, came about as a response to rampant consumerism.

Most styles are also influenced by the design aesthetics that came before them — either intentionally turning away from those styles or making small changes that evolve the previous style into something new.

Here are the stylistic and cultural elements that most influenced Hollywood Regency design.

Old-world glamour for a modern age

Hollywood Regency design adapts elements of the Baroque, Rococo, and Neoclassical styles. These styles were full of old-world glamour with curved lines and gilded surfaces.

Much like the Rococo style, Hollywood Regency style is glamorous in a playful way that doesn’t take itself too seriously. And like neoclassicism (which was actually a shift away from the over-the-top stylings of the Baroque and Rococo periods), Hollywood Regency incorporates some clean lines and loves a well-placed column.

The evolution of Art Deco

Hollywood Regency style came about between the Art Deco period and the mid-century modern period, and you can see elements of both in Hollywood Regency decor. You’ll find the glam gold tones, geometric patterns, mirrored furniture, and plush velvet fabrics of Art Deco design alongside the clean lines of mid-mod design.

There are a lot of words you could use to describe Hollywood Regency style, but if we had to pick one it would be “drama.”

This style came about during Hollywood’s Golden Age and was influenced by Hollywood set design — designers wanted to add as much opulence as possible to their sets so movie stars would be associated with glitz and glamour. Essentially, if you see a piece of furniture and you can picture Rita Hayworth or Ava Gardner draped across it, chances are it’s Hollywood Regency style.

Black and white design is another signature element of Hollywood Regency decor that gives a nod to those old black and white movies.

Hollywood glam isn’t the only part of California culture that influenced this interior design style. You’ll often see elements of California nature — like palm fronds and bold floral patterns — incorporated into this style.

Chinoiserie — including table lamps, vases, and artwork inspired by Chinese design — is another common feature of Hollywood Regency style, no doubt inspired by the Chinese-American minority that was already influential in southern California by the early 20th century.

Several interior designers played a role in popularizing Regency Moderne. Their work offers a look at how this style can come together.

Dorothy Draper, who opened America’s first interior design firm, often gets credit for originating Hollywood Regency style. She spent much of her career decorating hotels, and you can still see some of her early Hollywood Regency interiors at the Greenbrier Hotel in West Virginia.

William Haines was an actor turned interior designer, which is probably the most Hollywood Regency story ever. He decorated the homes of many of his famous A-list friends and consequently designed some of the most renowned Hollywood Regency mansions, including those of Joan Crawford, Tallulah Bankhead, and Betsy Bloomingdale.

Modern-day interior decorator Kelly Wearstler is continuing the tradition of styling boutique hotels in the Hollywood Regency style. You can see her work in the luxe interiors of Maison 140 in Beverly Hills and Viceroy Hotels around the world. However, her interpretation of this design aesthetic brings in more elements of mid-century style with the use of natural wood tones and abstract modern art.

How to bring Hollywood Regency style into your home

While the opulence of Hollywood glamour was once reserved for the rich and famous, it’s now accessible to everyone — even if you’re on a budget. Use these design ideas to bring Regency Moderne style into your home decor. 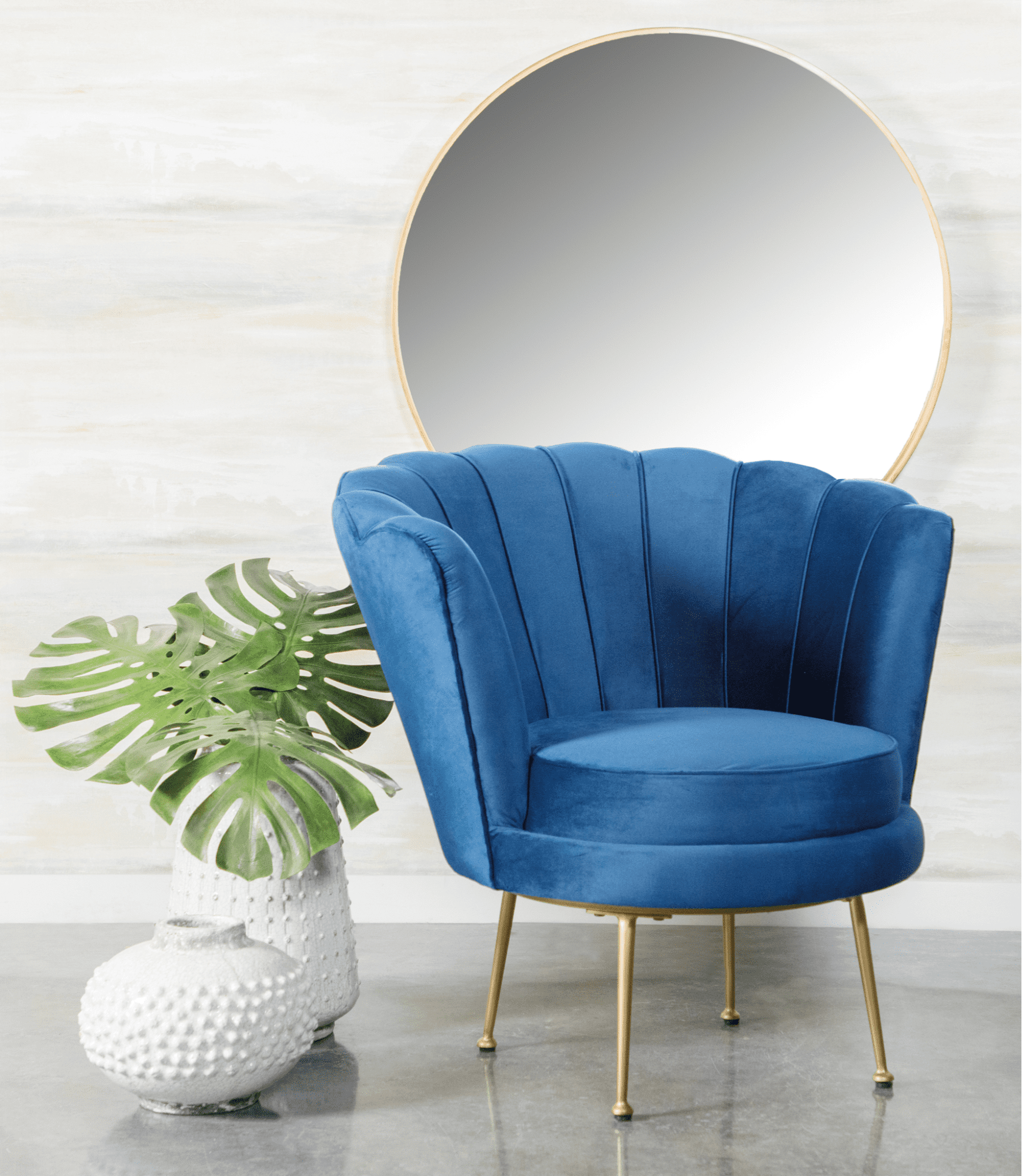 Popular color schemes for the Hollywood Regency style include jewel tones (emerald, amethyst, or sapphire) and bright summer shades (hot pink or lime green). To pull off these bold color palettes, designers often focus on one color per room. They’ll add a few pops of this color throughout the space, then fill in the rest of the decor with black and white, gold, glass, and acrylic surfaces.

For example, you might add bright blue to your room with a sumptuous tufted accent chair, matching throw pillows, and an area rug with a monochromatic blue pattern.

We’ve already mentioned that black and white — a combo that’s all about contrast — is a big part of Hollywood Regency style. But this design approach also creates contrast with the juxtaposition of curved lines and clean, straight lines.

Picture a sofa with an elegantly arched back — like the Frostine Button Tufted Sofa in silver — next to a geometric chrome and white lacquer-top side table. 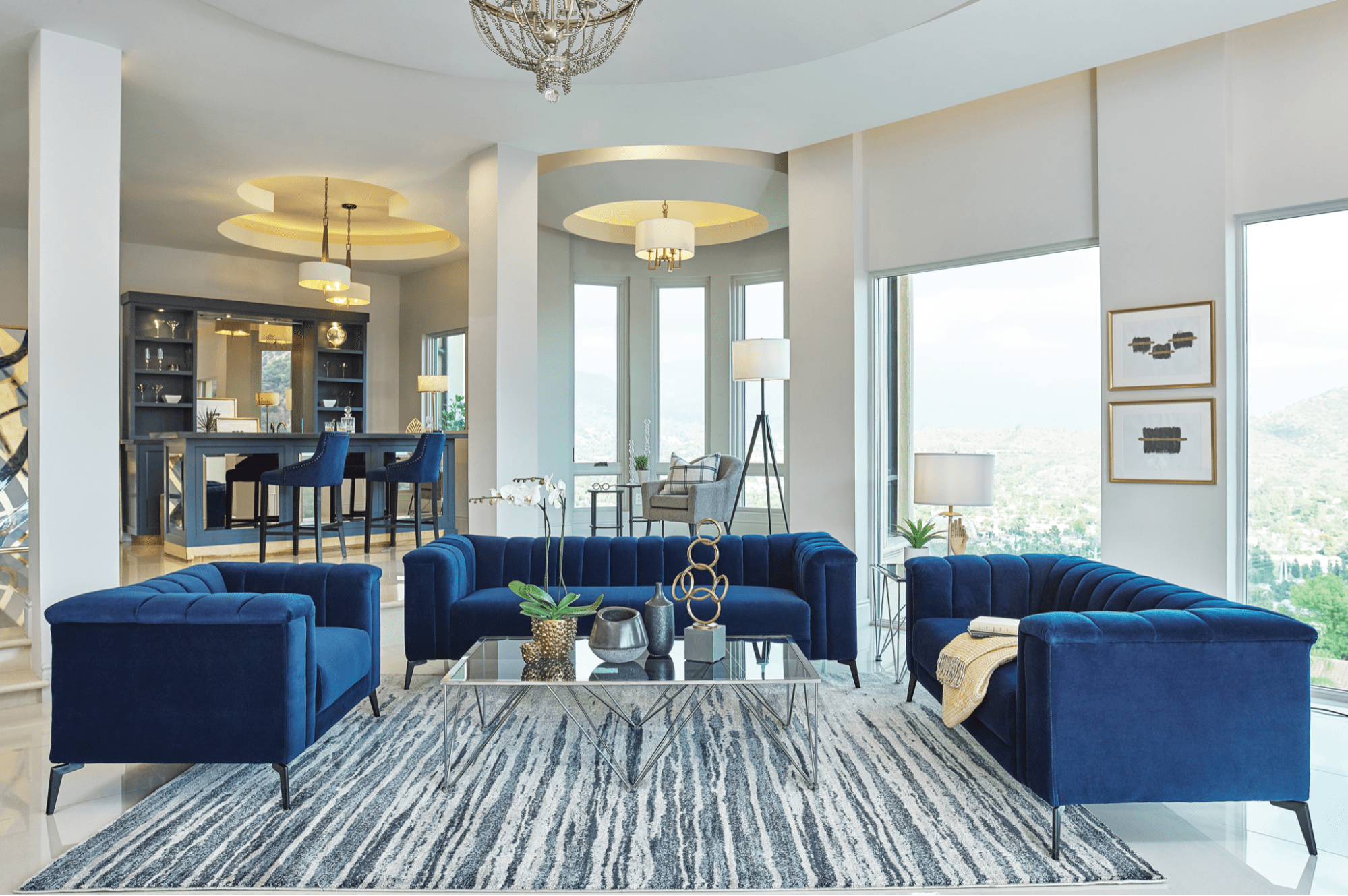 You won’t sacrifice comfort for this glamorous style. Creating a comfortable living space is a priority in Hollywood Regency design, with plush materials like velvet upholstery, silk curtains, and fur throws taking center stage. Add these textures to your living room with a sapphire velvet sofa or a faux fur ottoman. 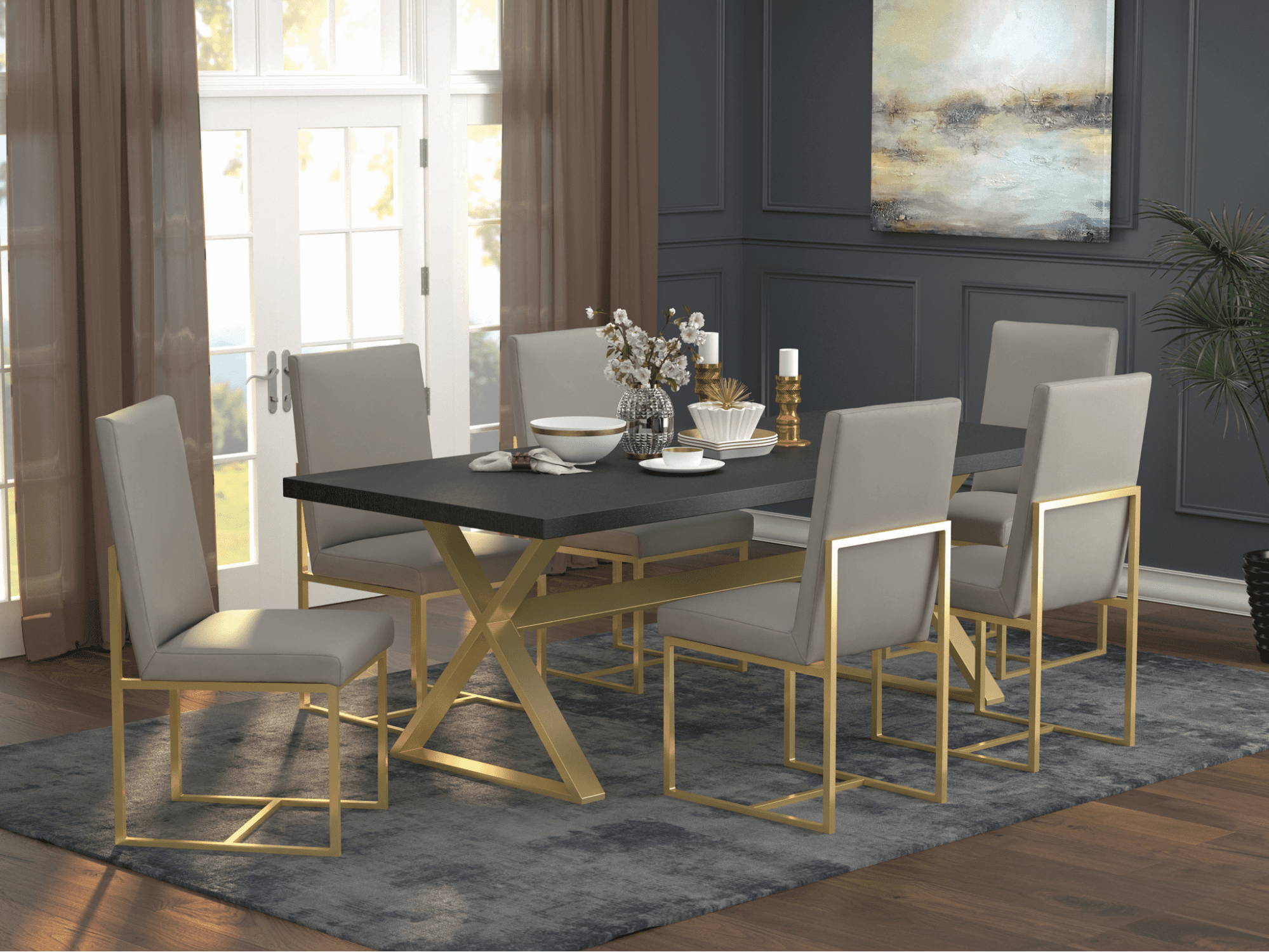 Nothing says opulence like gold. Bring the most glamorous metal into your home decor with light fixtures, accessories, and gold accent furniture.

Show off this finish in your dining room with a dark walnut and aged gold dining table. The geometric design will contrast beautifully with arched-back velvet dining chairs, and the dark-colored top will allow you to incorporate a natural wood finish without it feeling out of place in your Hollywood glam design. 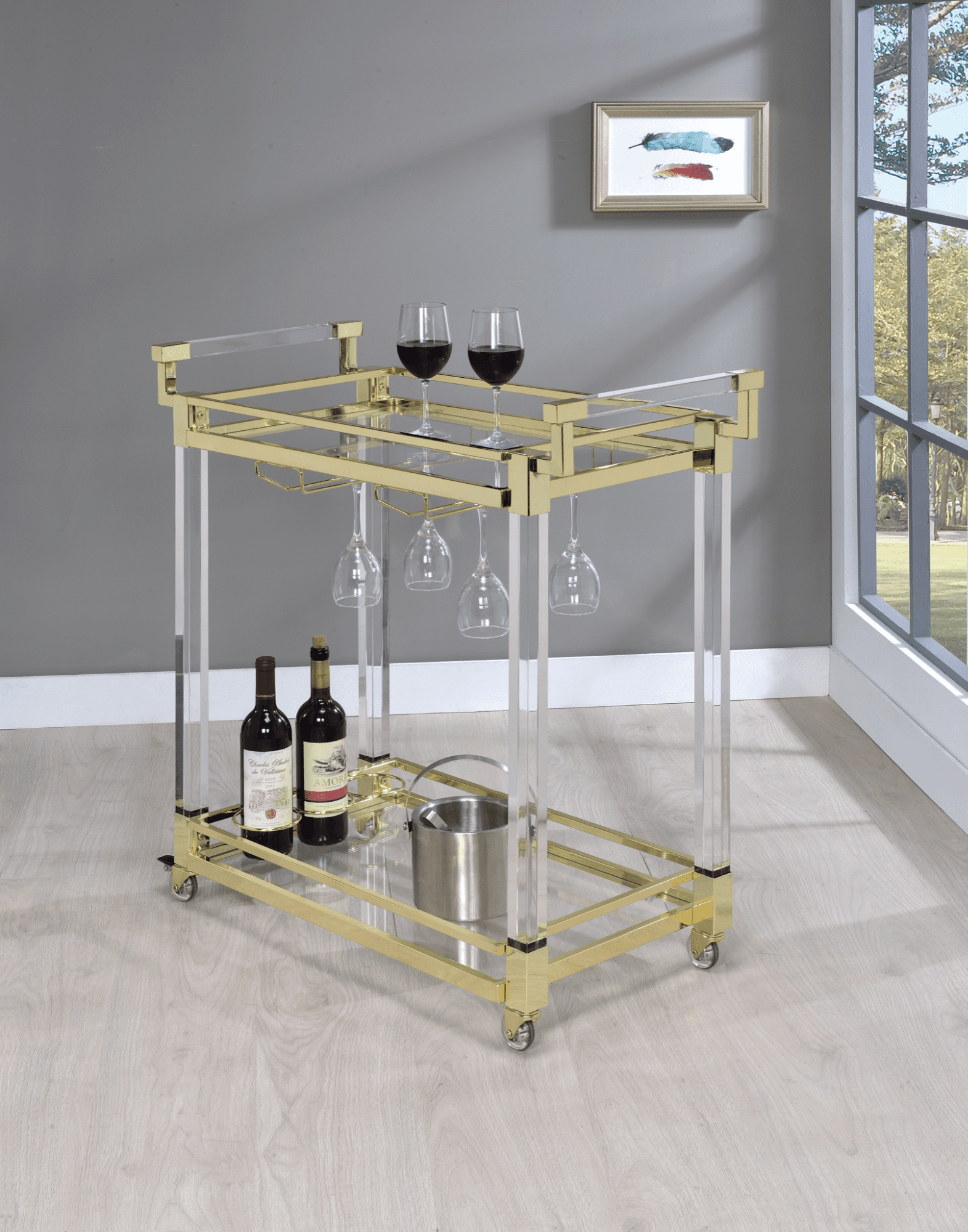 Hollywood Regency style leans into clear and reflective surfaces to make spaces feel lighter, brighter, and more open. Add this design feature to your home decor with a gallery wall featuring glamorous wall mirrors instead of photos, or hang a crystal light fixture to reflect more light around your room.

For your furniture, look for a glass top (like this round coffee table featuring chocolate chrome), a lacquer finish (like this glossy white side table), or a Lucite acrylic frame (like this Chanel 2-tier acrylic and gold bar cart). 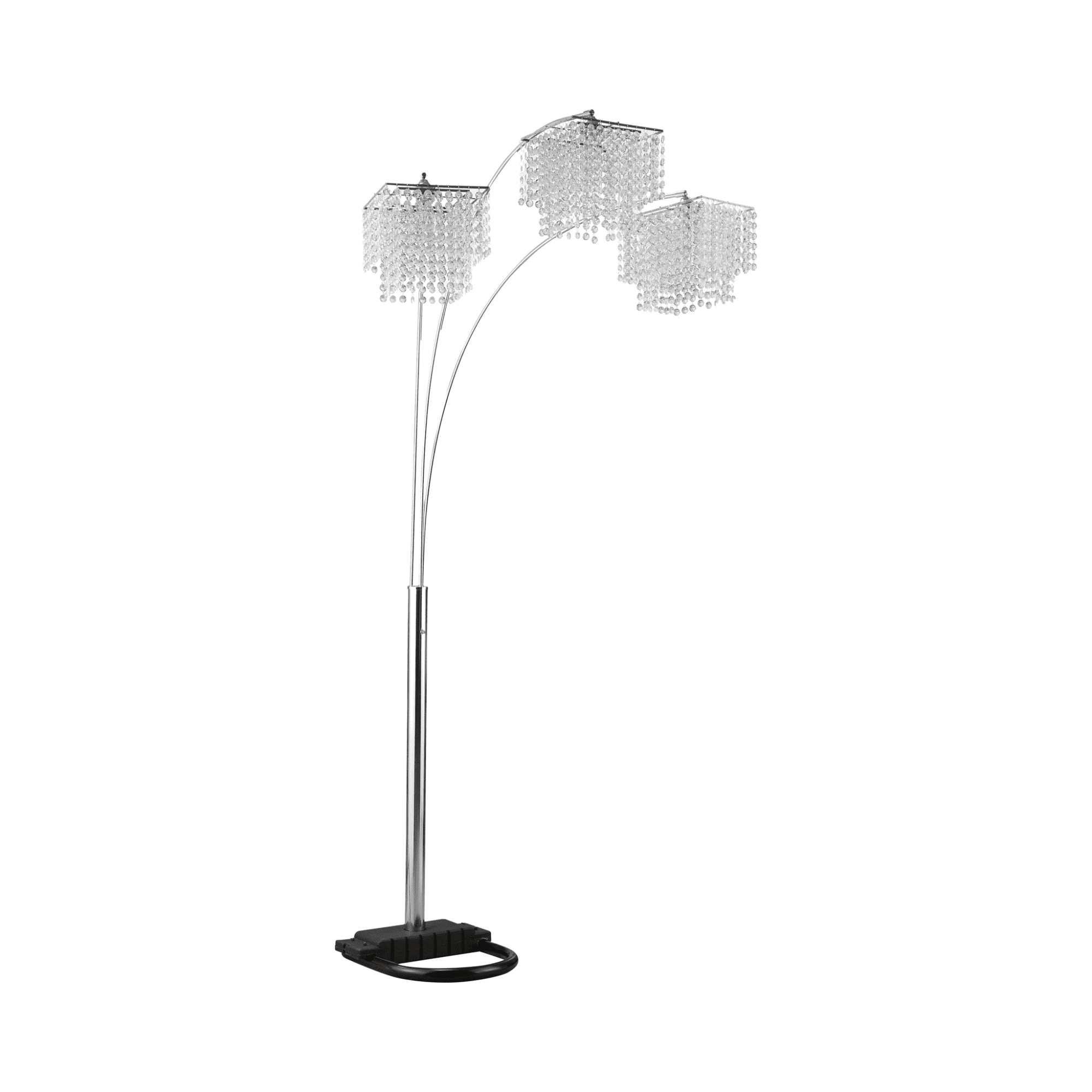 This style is ready for its closeup

Hollywood Regency decor came into style during the Golden Age of Hollywood, and it never really left. If you want to add big glamour to your space without sacrificing personal comfort, you’ll fall in love with the Hollywood Regency style. This aesthetic has endured because it allows us to be eclectic, express our personalities, and brighten up our spaces.

So go ahead and embrace Old Hollywood glamour, find the furniture that lets you be you, and never again ask yourself “Is this too much?” Because with Hollywood Regency Style, too much is never enough. 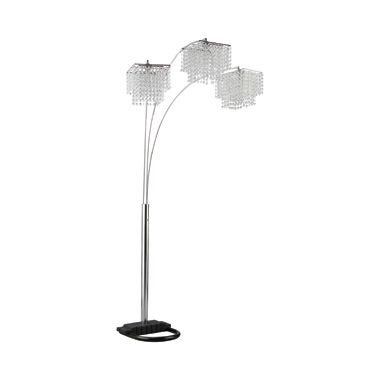 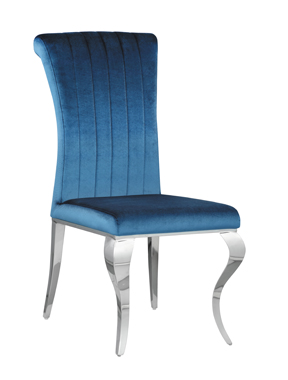 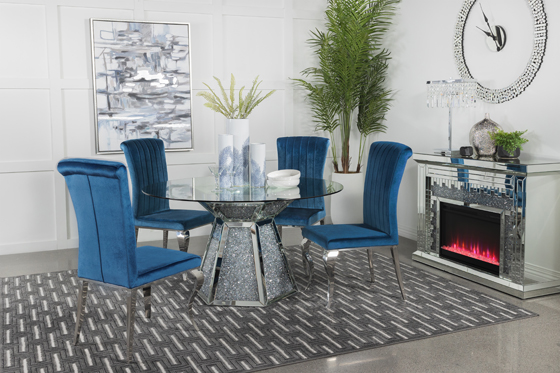 Carone Upholstered Side Chairs Teal and Chrome (Set of 4)